It’s Taco Tuesday y’all!! You remember the good ol’ days, right? When it was actually a weekly event? Yeah, me too. Vaguely. Do you miss it? Because I do! Truth be told, I’ve had a hard time finding new taco recipes that weren’t very similar to the many I’ve already made. Pinterest, you have failed me. I did, however come across a few newbs recently, so that bought us a few more Taco Tuesday  posts coming up. This one seems to fit in with my ever-present liking of Thai flavors. I told J the other day, “Apparently I really like Thai flavors…” as I listed the dishes I’ve made recently with the word “Thai” in the title. But hey, I like what I like. There are worse things, right? 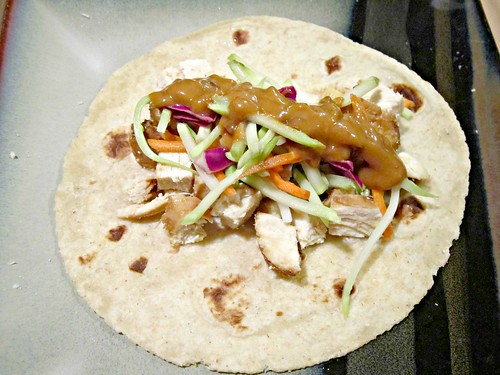 I made a few changes to the recipe I found – mainly the amounts for the sauce and the toppings – and I’m really pleased with the turnout. Make sure not to overcook the chicken. Dry chicken is never a good thing. Never, ever, ever.

Speaking of the variation in toppings…have you ever used broccoli slaw? I don’t think I ever have before, but I saw it at the grocery store and I thought it just looked like a good alternative to cole slaw for a taco topping. And when you mix it with a little rice wine vinegar…well, then it’s definitely a winner! It has a nice flavor and crunch to it that is a nice contrast to the soft tortilla, chicken and deelicious peanut sauce. I increased the amounts of liquid in the peanut sauce because it just wasn’t as thin as I wanted it with the original amounts. But the flavor was insanely good.

J always thinks it sounds weird to put peanut butter in a sauce or regular food or whatnot (he loves peanut butter though, in general), but he was a fan of this sauce for sure.

And as an aside, the blog I found this on – Mountain Mama Cooks – does a Taco Tuesday event as well. I’m going to have to go back and peruse her archives for some new recipes!

For the Peanut sauce