Howdy, friends! I hope you all had a fun and safe 4th of July weekend and are settling back into the grind of reality again. We had an extra day off of work on Friday and let me just tell you, an extra day makes a world of difference. I feel like we got SO much done at our house. The extra day gave us extra time to be productive and to socialize. That’s what I’m talkin’ about y’all. Balance. Now the challenge is to keep that momentum going.

We’ve lived in our house for a little over 18 months now and are finally getting things situated and set up the way we want them. My goal is to work on one room or project every weekend, and if we can stick to that, we’ll have the main projects done in just a few more weeks!! That’s exciting stuff, y’all. Fo’ real. 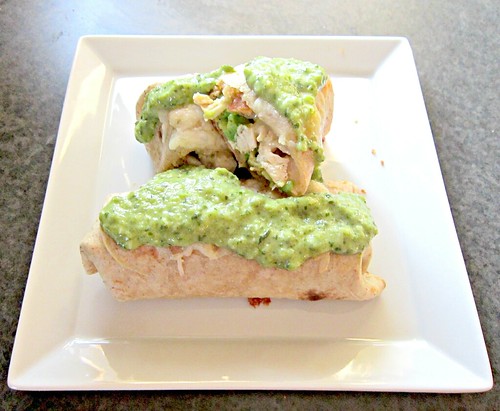 I’ve made another version of a chicken burrito with poblano cream sauce, but it was different. Delicious, but different from this one. The sauce for this burrito is out-of-this-world-amazing. And while I’ve used poblanos in plenty of recipes before, I’m starting to realize what an under-used pepper it really is. At least by moi.
The filling for these is simple, but that’s ok because it lets the sauce really be the star. Because really, the burrito is just a vessel by which to eat the sauce, let’s be honest. And you will likely have sauce leftover, but it won’t go to waste. You will find something (anything, everything) to put it on.
I’ve recently started throwing extras into the freezer, like immediately, if I know they won’t be eaten within a couple of days. I have some pork carnitas soup, Spanish rice, and now a leetle bowl of this sauce, too. Sure, I could’ve eaten it rightthenandthere, but I exercised some self-control and put it away. In the freezer. Where I couldn’t easily get to it and eat it on a whim.
Yeah, you’re right. That was a dumb move on my part.
And now I want to cry.
But instead I can save you from making the same mistake. Don’t save the leftovers for later…eat them right away. Or the next day, anyway. You’ll be glad you did. 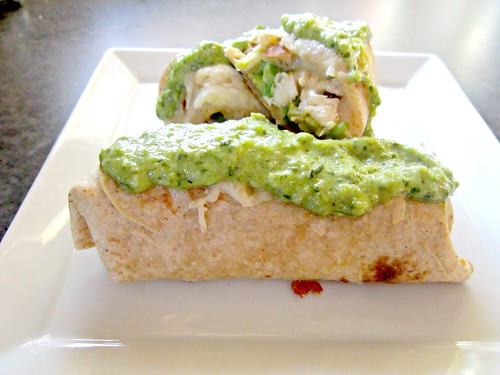