I’m going to tell you something that might make some of you look at me side-eyed.

I’m not really a fan of marshmallows. Gasp! I know. I used to love them as a kid, and I do still like those little mini ones in hot chocolate, but to just eat a big marshmallow or marshmallow-y treat is not appealing to me. I hear people talking about s’mores all the time, making them with the kids and such, and I’m over here like…can I just have the chocolate??

However, when the August theme for What’s Baking, hosted by Joanna of Kosher Kitchen, was decided to be Bake a Variation of S’mores I decided it was time to give it another go. 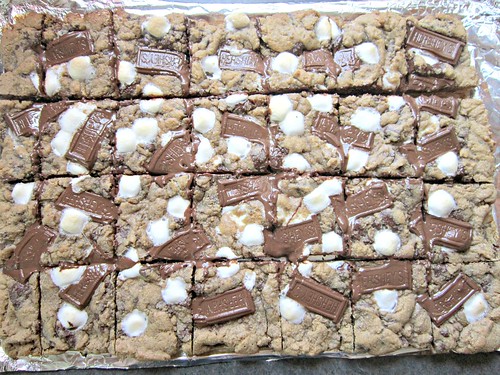 And these s’mores cookie bars, my friends we amazing.
Graham crackers on bottom, cookie dough with chocolate chunks and marshmallows, and then more chocolate and marshmallows on top – all melty and gooey. Yeah…this variation I’m definitely sold on.
I made these to take to a 9-year-old’s birthday party and they were GONE almost the second I put them down. 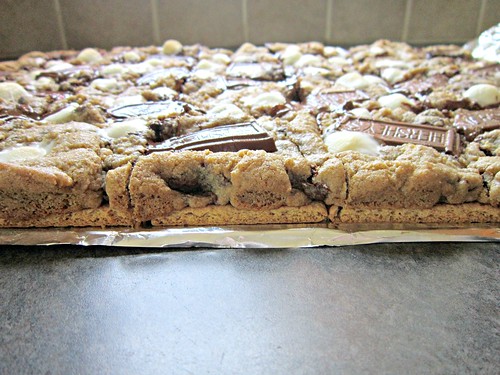 Nevermind that the party was outside and it was eleventy-bagillion degrees outside, therefore already melty, gooey s’mores bars were even more melty and gooey. Kids and adults alike were devouring them and boy was I relieved. Because…these simply could not return home with me. I had a few bites at home to try them out, of course. Quality control, y’all. Even J tried one. But he’s weird and doesn’t really like chocolate so…there’s that. 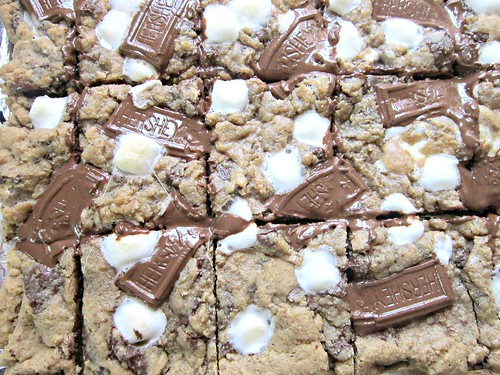 S’mores aren’t meant to be dainty or mess-free, and these cookie bars definitely aren’t either. Now, if you were to refrigerate them and only eat them in the comfort of air conditioning at room temperature, perhaps you could accomplish a no-mess experience. But what fun would that be. They are s’mores, after all. Meant for ooey, gooey, finger-licking-the-chocolate-off as you go, deliciousness.

P.S. I found after after I posted this that today is National S’mores day. It’s a sign, folks.

Ooey, gooey, chocolate and marshmallows on top of cookie dough and graham crackers…what’s not to love???
S’mores Cookie Bars
As seen on Amandaleine