I’ve recently discovered that I really like poblano peppers.  Not so much the hell-fire, burning my eyeball out when I go to remove my contacts feeling that happens if I foolishly cut and de-seed them without gloves on, but the peppers themselves are awesome. And they are a great vessel for stuffing. 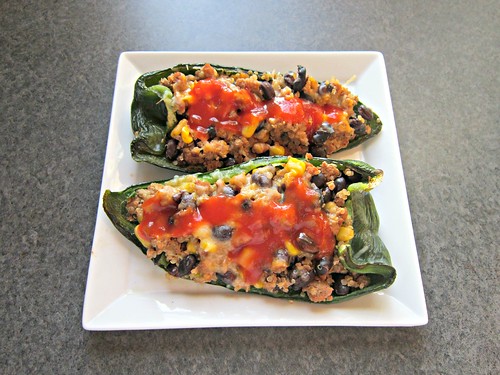 I told J the night that we had these that I actually prefer them to bell peppers, for stuffing. I like the thinner pepper. And the flavor, of course. You may remember these shrimp stuffed poblanos I posted a few months back, that J and I both love, which made me start thinking of other fillings I could make to stuff into poblanos. And thus the Turkey-Mex stuffing was born. This creation was a culmination of other dishes I’ve made, some recently and some farther back in time, that just made sense.

Sure, I could’ve used brown rice as the grain, but that’s so…typical, right? So, quinoa won out that spot. And then the black beans and corn, which are a staple for Southwestern-y type dishes it seems. Yes, I put corn in the food again. This is a big breakthrough, y’all. As in,  prior to the Southwestern chicken egg rolls, it has never happened in my kitchen. Ever. So, to have it happen twice in a matter of a couple of weeks is kind of a big deal around here. 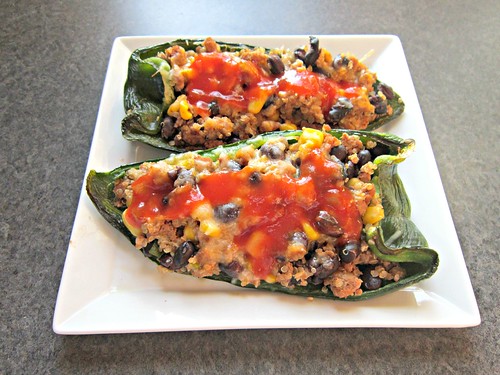 They turned out great. Perfectly seasoned, and set off nicely by the taco sauce topping. I’ll definitely be making these again, and thinking up other varieties of filling that I can stuff these peppers with.
Sorry bell peppers, you’ve been outdone.
Turkey-Mex Stuffed Poblanos
A Sweet Beginnings Original
Ingredients
Preparation
« Paprika-Turmeric Salmon with Lemon-Turmeric Sauce
Chorizo Breakfast Hash »