I think the first time I ever heard the phrase “Taco Tuesday” I was in high school or shortly thereafter, and it was a Taco Bell commercial. Do you remember, back when crunchy tacos were $.49?

Well now I don’t remember when or where I first heard of Taco Tuesday! And with that price disclosure, I’ve just made myself sound old. That was like, $.30 ago or something?? I can’t say for sure, I haven’t had Taco Sunday at Taco Bell in many years. But I think I saw (or heard) a commercial recently boasting $.79 tacos on Sunday. Meh. Those were the bomb diggity back in the day, but my taco palate has grown a bit since then. I prefer a soft tortilla, for one. But I also like to be a little more adventurous that just ground beef, lettuce, cheese, and tomato. Not that a good beef soft taco isn’t great now and again, but after trying so many different varieties, it’s hard to go back to the traditional. Ya feel me? 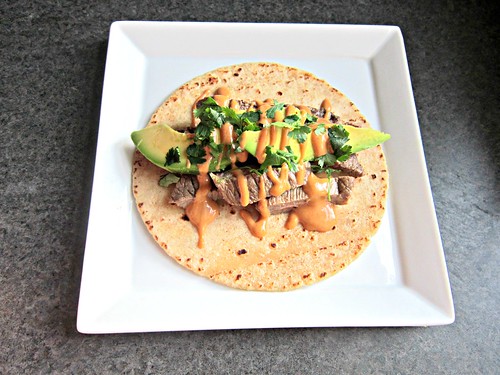 When I first saw these tacos, even I thought it sounded a little weird. Peanut butter and steak? (Ok, who am I kidding…I like peanut butter, mustard, and canadian bacon (or bologna) sandwiches. Yes I said it. Are you still going to be my friend??)
The first time I tried them, it did not turn out well. Peanut butter warmed in the microwave = disaster. Thick, pasty, not good. Disaster. But after I made the Thai Chicken Tacos and realized it was possible to make a smooth, creamy peanut butter sauce without involving the microwave, I decided to make these again with a different version of peanut butter and Sriracha sauce. This one was a winner! I put in the instructions below, to add the liquids in small amounts until you get to the flavor profile and consistency you like. You all know how I love tangy, vinegar-y flavors. You may not, so you may not want to add as much vinegar. You may want more soy sauce, or more lime juice. More SRIRACHA! Some people use sugar in their peanut butter sauce…I did not. You can throw some in if you like…1/2 teaspoon or so. I wanted my thin enough that I could get a spoonful and just drizzle it over my tacos and it would still stay put.
Mmm. Just thinking about that sauce is making my mouth water a little. At 6 am. That’s not good. I’ll have some more coffee instead.
Can we just stay on Tuesday for awhile? I think this is the first week in the history of…ever…that I haven’t been looking forward to Friday. Why, you ask? Because one of my very good friends that is also a close co-worker is leaving on Friday. She and her family are moving back to their hometown where all of their family is. I get it. It makes perfect sense, especially with their new baby. But dammit if I’m not gonna miss them!! I know we’ll keep in touch and I’ll see them from time-to-time, I’ll just miss my everyday work buddy. You don’t realize, sometimes, just how much of your day/life is spent at your job. You generally see co-workers more than your own family, if you work outside of the home.
I guess now, at almost 34-years-old, I’m starting to really understand that “old timey” emphasis on family dinner time. For many it really is the only time they can all sit down together as a family during the day. I think having a themed food night is a good way to bring the family together…whether it’s Taco Tuesday, Game Night Friday, or something else, where the family gets together and actually spends time together. Not with faces buried in computers or cell phones, but actually talking and doing something fun together.
It’s a foreign concept to many, I know, which is sad really.
So, whether your family consists of you and a significant other, you and a roommate, or if there are kids in the mix as well…take the time to talk about your day together, eat a meal (these tacos, perhaps?) and unwind together each night without TV or cell phones or computers. It’ll do wonders for your relationships and your own happiness, I assure you. We all need those connections and those bonds that seem to be lost with the ever-increasing obsession with technology. I fall victim to it as well, so I understand the need for all this as much as the next guy.
Steak Tacos with Sriracha Peanut Butter Sauce
Adapted from Dessert for Two
Ingredients
Preparation
« Squash, Zucchini, Spinach & Chicken Pasta Bake
Lemon-Rosemary Tuna Steaks »