Well, it wasn’t my intention to post two shrimp recipes in a row, but hey, it happens. And after all, shrimp is delicious. And yesterday was a burger. Today…tacos! Totally different animals, so-to-speak. 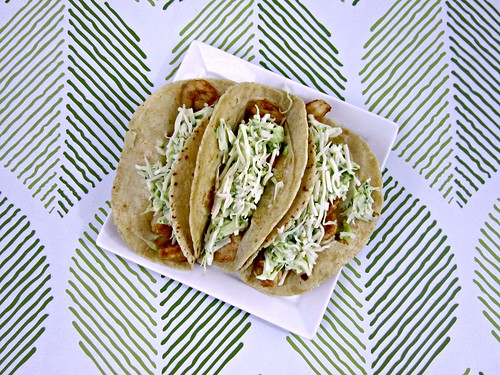 I love shrimp tacos. I probably have 5 or more variations of spicy shrimp tacos, and even though they all have similarities, they’re all a little different. And all so very delicious. These are no different. What really makes them though, is the slaw. Cilantro, green onions, garlic, lime juice, and Greek yogurt. Um, yes. Yes, please. And of course, the shredded cabbage gives the tacos a nice crunch.
A little bit of spice – though I didn’t think they were spicy at all, but I’m a spicy kinda gal – with some creamy mashed avocado, creamy, tangy slaw, and of course a little cheese. That, my friends, is taco heaven. I mean, just look at it. How can you not want to reach through the screen and grab those? And devour them immediately.
I’ll tell you that I was mighty sad when I was done eating and there were no more delicious little shrimpies in the pan. I learned a long time ago that a pound of shrimp doesn’t go very far for me and J. You’d think I’d remember to double it, but I seem to always forget. Sad panda over here. We got four stuffed tacos out of it, so take that information and apply it to your situation…if you need more tacos, I would double the shrimp. Like I should have. We had a good bit of slaw and extra sauce leftover, so we could have easily had another pound of shrimp and plenty of toppings to go with it. 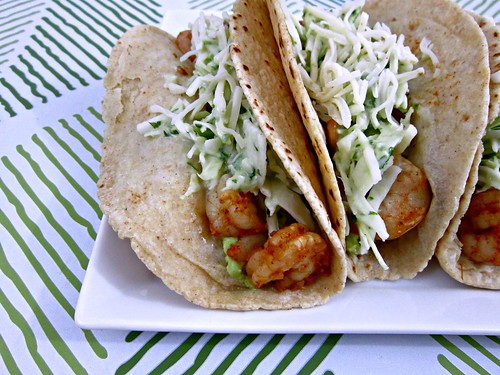 Don’t miss out on these amazing shrimp tacos, and make plenty so you aren’t left staring sadly at an empty skillet, wishing there was more!!

For the Garlic Cilantro Lime Sauce

For the Shrimp Tacos