As the days count down, my stress level seems to be steadily climbing and I’m not even really sure why. I mean, there isn’t much to stress about. I’m marrying the love of my life, almost everything is booked and paid for, and other than the last minute things that can’t be done any sooner, everything is pretty much done. Yet I stress anyway. Invitations were mailed out yesterday, making it sort of “more official” and then someone tells me to add 10% to my guest count for people who don’t RSVP.

Um…who doesn’t RSVP to a wedding and shows up anyway?? Seriously…do people do that?? I know people sometimes RSVP yes and then don’t show up, but to not RSVP at all and then actually show up? I just can’t even fathom that. Don’t people know that food, alcohol, favors, seating, etc. are all planned around the people who say they are going to BE THERE?? Maybe this is a small source of my current stress?? Perhaps? For cryin’ out loud people, just RSVP!! /rant 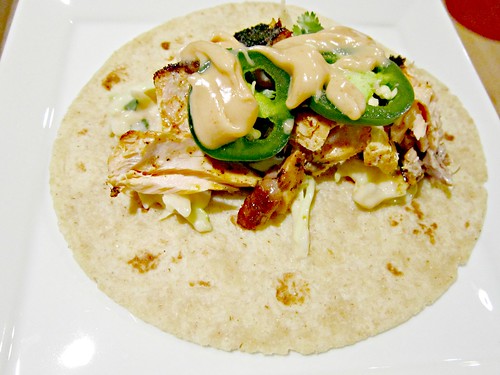 I would say that J and I eat salmon either once a week or once every two weeks, at the longest, so I’m always looking for new ways to make it. Salmon tacos could be a hit or a miss, depending on what accompanies them. But, with this slaw and Sriracha aioli, there was no way for this one to be a miss.
Sriracha is becoming one of those ingredients that is making an appearance more and more often in our kitchen these days and that spicy kick it gives to…everything…is one that we love! It goes great with the cool, creamy slaw and crispy, grilled salmon. Make these tonight and pretend you’re in tropical paradise with us!
Salmon Tacos with Cilantro-Lime Slaw
As seen on Willow Bird Baking
Ingredients