How’d you like that longer-than-necessary title?? But hey, I have to let you know all the goodness that is to come in this post, don’t I?? Or perhaps I should have left the dipping sauce as a surprise at the end? Oh well, what’s done is done, my friends.

Have you ever had the Southwestern Egg Rolls at Chili’s? Well, I’ll be honest…I have not. Because I’m not particularly a fan of corn in my food. I know, I know… But J loves them and when he was helping me menu plan a couple of weeks back, egg rolls were something he requested. Particularly of the Chili-esque variety. And then, of course, I had to add meat into the mix, because the hubs doesn’t do vegetarian for dinner. He needs the protein, and a few black beans aren’t going to cut it. So, chicken seemed like a good choice. 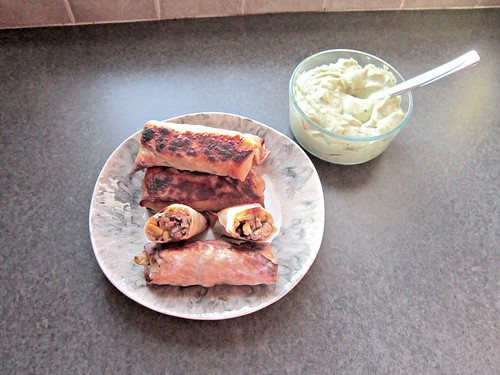 And then there has to be something to dip them in, riiiiight? I heard that Chili’s serves theirs with some sort of avocado ranch dip, so I decided to kick it up a notch with cilantro, lime, and Greek yogurt. Ermahgerd, y’all. That is one delicious sauce.
Have you ever noticed that not many things that we eat are without some sort of sauce or dip? Well, maybe you haven’t noticed, but I have. I wonder if that’s normal? I know people who eat their sammiches and burger dry. As in, no condiments on them. And this baffles me. So I wonder if we are perceived as over-users of condiments, sauces, and dips? There’s something useless to ponder! 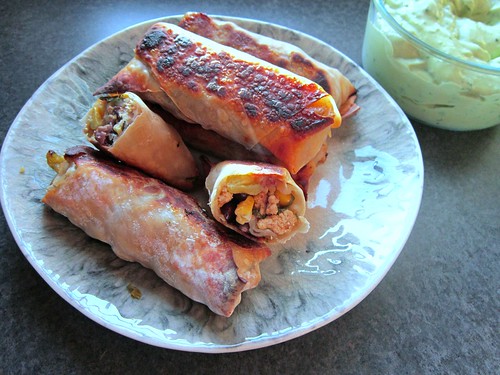 I’ll tell you that when I started rolling up these egg rolls, they weren’t very pretty. But, by the time I got to the last one, I’d gotten the hang of how to roll them better and they came out looking pretty decent. You know, how an egg roll is supposed to look instead of like a hot mess. I have this challenge rolling burritos as well. Practice makes perfect (or at least decent) so I just have to keep on keepin’ on, y’all!
I opted to use ground chicken breast in these egg rolls, but you could always you chopped or shredded chicken breast if that’s your preference. I was going for quick and easy, and ground chicken fit the bill for that task. I had originally planned to keep some of the mixture separate, sans corn, but in the end decided that would be a bigger hassle than was necessary. So, I sucked it up and ate them with corn. And I survived! Haha. But really, I didn’t even notice the corn and the overall flavors were so good. Chicken, corn, black beans, spinach, and cheese, all seasoned up with the Southwestern flavors we all know and love. And these babies are baked, not fried, so you get a healthier, but still crispy, version of these egg rolls. I’d say that’s a win! 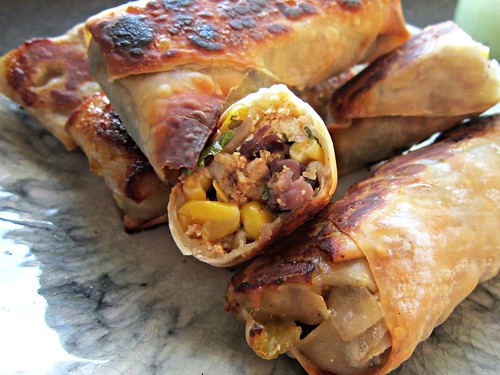