Half-way through June?!?! How in the world are we already half-way through June? It is insane how quickly time passes these days. How was your Father’s Day? J and I went to see my Dad on Saturday, which was nice since I don’t see him but a few times a year. Moving away from home definitely has it’s disadvantages, but it makes the time I see my family mean that much more. I hope you all had a wonderful day, whether you spent it with your spouse, children, brothers, fathers, or friends. 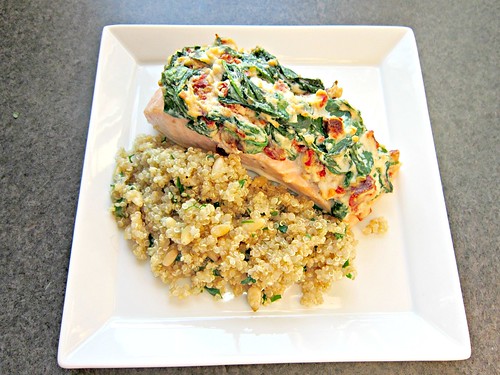 On Sunday, J and I went to church and then spent the rest of the day running errands and doing housework. Exciting day, right? Ha! Zoey made sure to give her Daddy a BIG ol’ kiss to start his day off right, Skeety came in to give some snuggles, and Roo…well, he was just his usual silly puppy self. All-in-all it was a good weekend. 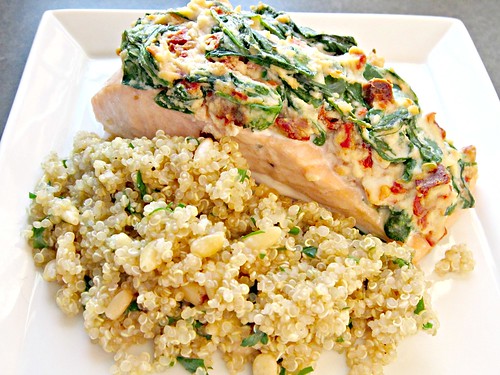 And now I bet you want to hear about this dish, eh? Well, J looooves sun-dried tomatoes, so anytime I see a recipe that includes them, I know it will most likely be up his alley. And since this recipe also includes salmon – it was sure to be a hit. I was a little nervous about the pine nuts in the quinoa pilaf because J claimed to not like the. But I’ve learned during my time with him that sometimes what he’s tried in the past and didn’t like, he has a different opinion about when I make it for him. So, I decided to keep them in, and it worked out pretty well. I will spare you the details of what he asked me if they were, but he ate them and he didn’t complain. 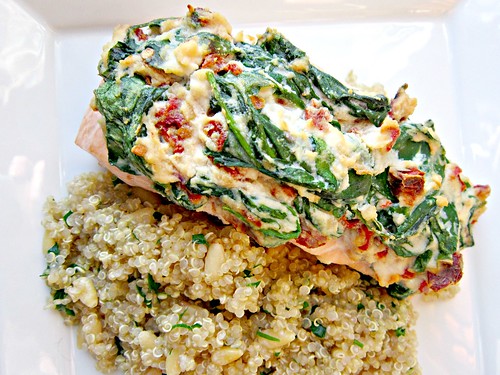