I went back to the gym yesterday after a 6 week hiatus and my legs are soooo sore. Like, I thought they were going to collapse under me when I was walking to my car after the workout. Squats are the devil. But, no pain, no gain as they say. Today I’ll go back again. And tomorrow. And hopefully after I’ve gotten every muscle good and sore and angry, they’ll be kinder to me in the weeks to come. I like a little soreness, to let me know I had a good workout, but not being able to walk or raise my arms to wash my hair in the shower is a bit extreme. It’s a good thing I have a personal trainer as a boyfriend, to tell me which exercises to do, and then how to cope with aches and pains. He likes to help and teach me new things. He’s like a proud papa when I go workout on my own.

And, in the way that he likes to teach me new things in the exercise world, I love to introduce new food to him. Things he’s never had before (some he’s never even heard of.) Awhile back I asked if he wanted to try lamb chops. He said he’d never had them, but sure! I have a couple of recipes on the blog for ones I’ve made in the past, but when I saw this recipe I decided we’d try it out! 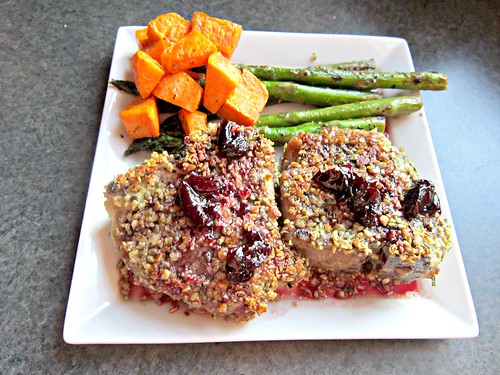 The original recipe called for roasted pistachios, which I was sure I had a bag of in the pantry. But, when I went to make them, no pistachios were to be found. I panicked a little at first, because I’d already started the sauce and the grocery store isn’t just around the corner, so leaving was not really an option. I dug through the pantry to see what I had that could take the place of pistachios. I found pumpkin seeds. Hey, they’re green, crunchy, and roasted so why not?!? 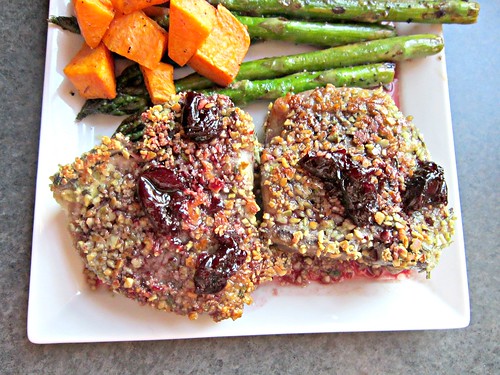 Fortunately for me, it turned out really well. The crust was crunchy, the cherry port sauce was delicious, and J has now had a taste of lamb. And he liked it! I felt a little silly as I got down to the last of the meat on my chop because it was so good, I couldn’t resist picking up the bone and trying to gnaw every last morsel off of it. That’s totally acceptable, right?
Pumpkin Seed, Garlic, & Rosemary Crusted Lamb Chops with Cherry Port Sauce
Adapted from In Sock Monkey Slippers

For the cherry port sauce

For the lamb chops