Miniature waffles, topped with crispy chicken bites, and a sweet ‘n’ tangy syrup are the perfect finger food for any occasion! 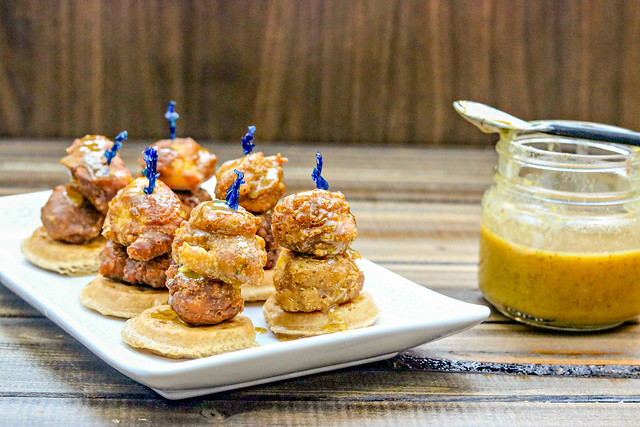 Today is an extra special post, as it is part of a SURPRISE virtual baby shower, hosted by Terri of Love and Confections, for a fellow food blogger, Angie of Big Bear’s Wife, who just welcomed her bouncing bundle of baby boy to the world! Angie is a lover of all things Disney, and all things southern food, so what could be a better baby shower food than mini chicken and waffles?!? As a fairly new mom and food blogger, myself, I am so excited for the journey that Angie is about to embark on. It’s no easy feat, but it is worth every sleepless night, every shower missed, every meal ordered out, every time you look at that little being that you created. Congratulations, Angie & Big Bear!

Should I be embarrassed to say that I had never previously had chicken and waffles? I know it’s served at places around here, and I’ve even been to a Waffle House a time or two. But I’ve never tried it. Which I’ve learned now, is such a shame! Because holy yum! I mean, meat and carbs with a sweet and spicy syrup – how could anyone not love that?? Tell me how?!?!

I have been coveting a mini waffle maker for awhile now, to make waffle-y things for the baby, but…apparently they are next to impossible to find anymore. I mean, they have commercial ones that’ll run a couple hundred dollars, but…No. That’s not happening. And when I say mini, I don’t mean just small. I mean the little tiny waffles that are about 2 inches in diameter. Because…adorable. And perfect for appetizers like this, or making a whole array of finger foods for my little. So, because the mini waffle maker is being an elusive beast, I opted to go ahead with the recipe and use organic frozen (apple cinnamon) waffles, instead. And I have no regrets. 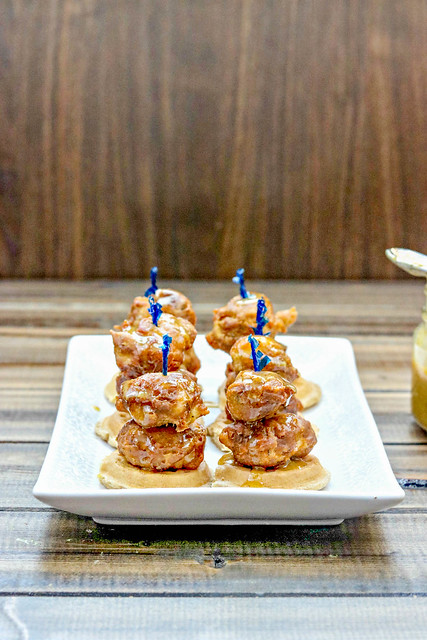 If you are one of the lucky ones who nabbed a mini waffle maker before they all became unavailable, then definitely make your own little minis. But, if you don’t have one or don’t care to mess with it, let me just tell you that the frozen variety work juuuust perfectly. And the little has been enjoying the extras for breakfast this week.

And that chicken. Ohmygoodness, that double crisped chicken. I think a key factor in the whole chicken-and-waffles combo – besides the syrup, of course – is that the chicken be crisp on the outside. You know…texture variety and all. Then there is the syrup. Honey, maple syrup, Dion mustard, and – if you like a little spice – a dash of hot sauce. And we all know I love some spice. 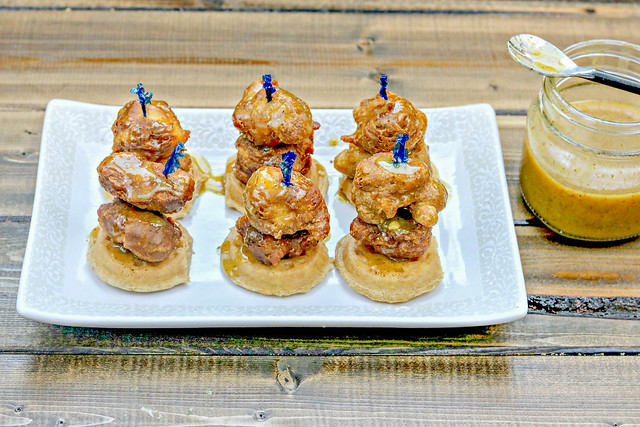 You can choose any flavor of waffle…buttermilk, whole wheat, apple cinnamon…but I thought the apple cinnamon worked really well with the flavor profile of this dish. I think J was more interested in dipping the chicken bites into the syrup than anything. That just meant more of the waffles for Nat, and there were no complaints from my little carb-loving girl.

I, however, enjoyed them in their entirety. Each perfect bite of waffle, chicken, and delectable syrup.

Annnnd, now I want more of them. Anyone wanna deliver to me at work? No? Ok. But at least make these mini chicken & waffles for yourself.

Check out the links below for more delicious eats in honor of Angie! 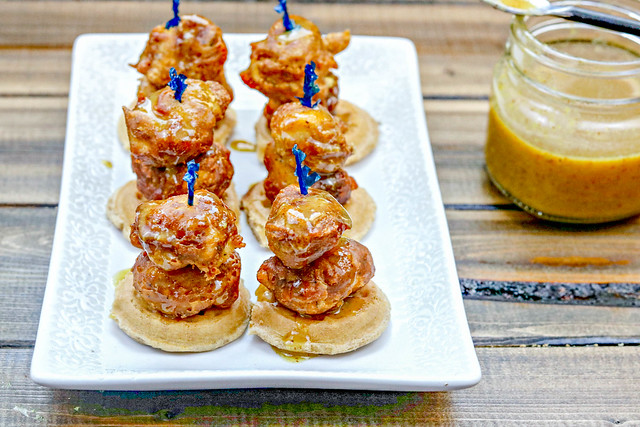 Please take some time to check out all the amazing recipes we made for Angie’s virtual baby shower!

Baby Blue Punch from Or Whatever You Do.
Easy Fall Party Punch from Miss in the Kitchen.
Simple & Fun Mimosa Bar from My Life Well Loved.
Simple Southern Sweet Tea from Love and Confections.