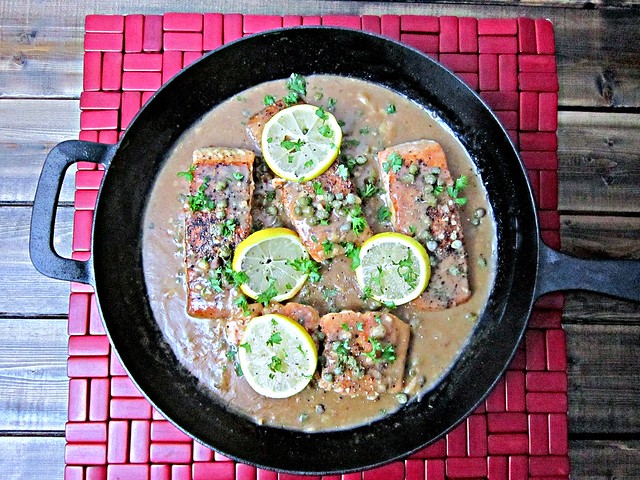 It’s Monday, and I know that is not something most of us are typically excited about, but why not embrace it? I mean…I may have only gotten about four hours of sleep last night, between all the wake-ups, but the weekend was a success overall (I’ll spare you some of the less-than-fun details) and this week has to be better than last week, at work. I’m choosing to be optimistic!

We started the weekend off with this fantastic meal. And you know I loved it, because lemon. All things lemon. And salmon, of course. But, lemon. I’ve made chicken piccata before, and we really enjoyed that, so when I saw a recipe for salmon piccata – UM, YES. So much yes. Now, I may have had to hurriedly inhale mine standing at the kitchen counter, holding a hungry baby, but gosh doggit, I enjoyed every bite! J was a fan as well, and asked what was in the sauce.

Well, my love. Lemon. That’s all that really matters in the end. Right? 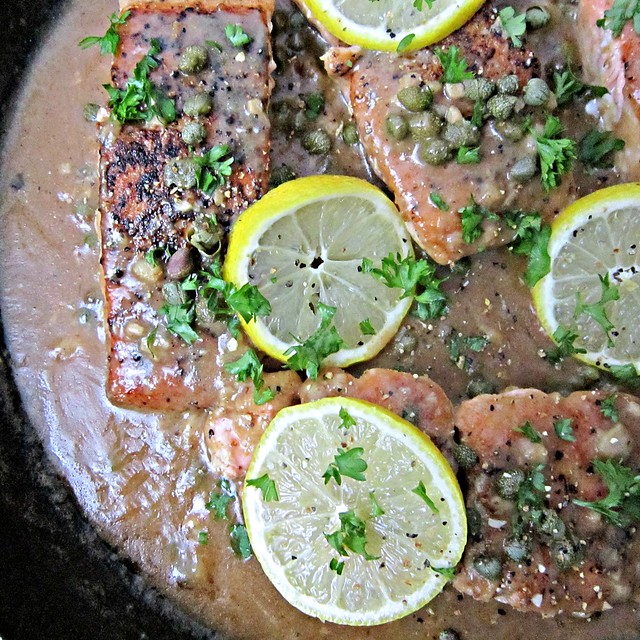 But seriously, the lemony sauce is not too lemony – if there is such a thing – and it compliments the salmon very well.  You know, that whole fish and lemon thing is big for a reason. Oh, and of course this is fairly quick to prepare – always the goal in our house! Especially on a Friday night. By the end of the week I’m worn out and like to keep the Friday dinner as simple as possible – even more so than the rest of the week. And did I mention that the sauce also has wine it? Friday + wine in dinner = success!

And if the lemony sauce wasn’t enough, we had lemony quinoa and lemon pepper sauteed asparagus to go with it. Can you say obsessed, much? I know, I know. It’s a problem. Well, it’s not really for problem, but it is a slight – ok major – obsession. Addiction, even. Lemon. Balsamic. Chocolate. Maybe I should change the blog name to that. Ha! Let’s take a vote on that.

In the mean time, do yourself a favor and add this to your menu.

Lemony Salmon Piccata is a healthy meal you can whip up in less that 30 minutes, but will taste like it took you all day!
No ratings yet
Print Pin Rate
Course: Main Course
Prep Time: 5 minutes
Cook Time: 15 minutes
Total Time: 20 minutes
Servings: 4 servings

Lemony Salmon Piccata is a healthy meal you can whip up in less that 30 minutes, but will taste like it took you all day!