TGIF y’all!! I haven’t been this ready for the weekend since…well, last weekend. Ha! But really…it’s been a loooong, slow week and I’m ready for some sleeping in and down-time. J is going fishing early Saturday morning and then Saturday night we’re going to the Austin Symphony Orchestra to see their Beatles Tribute. His mom has season tickets and offered them to us, so we figured, why not? It’s something different and an excuse for a date night! 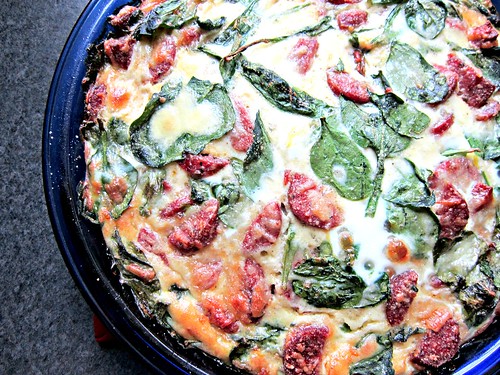 Since he’ll be out the door before it’s even daylight, it’s unlikely I’ll be up to make him breakfast. But maybe, just maaybe I’ll get up early and make him one of his favorite breakfasts on Sunday. Crustless quiche is definitely one of his favorite forms of breakfast, and I’ve been trying out different variations of it for some time. Of course, in my quest to use up all our smoked venison sausage, it was only natural that I find a way to use it in a quiche!! 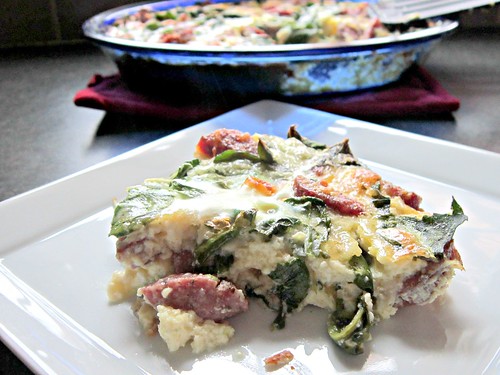 And let me just tell you, this baby was chock full of good greens! And the Gruyere…well, I used it in dinner the night before and had enough left over so I figured, what the hell, lets throw this in here too! I ate a little sliver and left the rest for him, because I’m nice like that. He really enjoyed it, and I think it’s his second-favorite version…the original always wins out as the favorite. It takes a little time to make and set, but it’s well worth it once it’s done. Make this for your family this weekend!
Crustless Smoked Venison and Gruyere Quiche with Spinach, Kale, and Arugula
A Sweet Beginnings Original
Ingredients
Preparation
« Lemon Sugar Cookies with Lemon Cream Cheese Frosting
Sammich Saturday: Brie & Blackberry Chicken Sammich »