You guys. How is it already September 23rd???  It really is true that the older you get, the faster time goes by. I mean, wasn’t I just getting married last weekend?!?! Sheesh.

The last week or so has been a little rough, my motivation really lacking, which is why the absence of posts the last week or so. I apologize for that. I pinched a nerve (or so I’m guessing) in my right shoulder last Sunday, which caused me to have pain all the way down to my wrist and a T-Rex arm for almost a week. It was not pleasant. I still have some pain in my forearm if I fully extend it and turn it a certain way, but it is tons better than what it was. Of course J wanted me to go to the doctor, and stubborn as I am, I refused. So, all I can do is speculate what happened and hope it heals up soon! Not the smartest route, admittedly, but that’s just how I roll sometimes.

Then we got some news on Friday that was not the greatest, but we’re trusting God with it and believing for better things to come our way very soon.

So, it was a rough week, last week. This week started off…not much better, in the motivation department, but yesterday I got an email that helped to brighten my day and my mood. I had entered a raffle on another food blog, for a ticket to a food blogger conference, Mixed, which is coming up next weekend. And I won!! There were two tickets to be given away and I won one of them. Coincidentally, the other ticket was won by one of my friends on my cooking board. So, I’m super stoked about that. The conference is in Houston, just a few hours from me, so I can easily drive to it. I’ve always wanted to go to one of these food blogger conferences, but they are usually in another state or more money than I can spend on a ticket, plus travel, hotel, etc. This one is just a 3 hour drive away and a free ticket!! So, yeah, I’m excited.

Sometimes we just need a little bright spot to remind us that all is well, right?

Yummy food doesn’t hurt either. Food with beer in it, even. 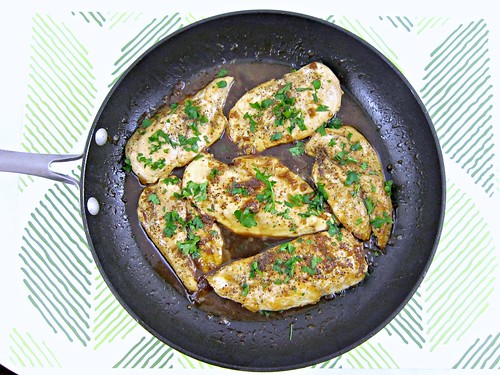 Now, I’m not a beer drinker myself, but I can appreciate the flavor it adds to food at times. This is one of those times. When I went to buy the beer, I had a particular pale ale in mind that I had used in a previous recipe, but they were out. Which sort of puts me in a bind because, well, I don’t know anything about beer.

So, here I am standing at the rack at the grocery store where you can buy individual 12 ounce bottles of beer, and I have no clue what to buy now. Until I see a Lemon Shandy beer. Uh. Lemon. Yes.

This particular beer is a wheat ale (which means diddly to me…) and really all I was going for was a light beer versus dark. And if it had any citrus notes to it at all, that had to be good, especially when you throw honey into the mix. Lemon + honey = all the good things. Now, if you are one who doesn’t cook with alcohol, that’s ok too! You can sub chicken broth for the beer (and maybe a squeeze of lemon!) and still have an amazing sauce!

This is another one of those easy, weeknight meals, that you can have on the table in less than 30 minutes, that tastes amazing. You know, my favorite kind of meal! And after you try it, this will be one of your favorites, too! 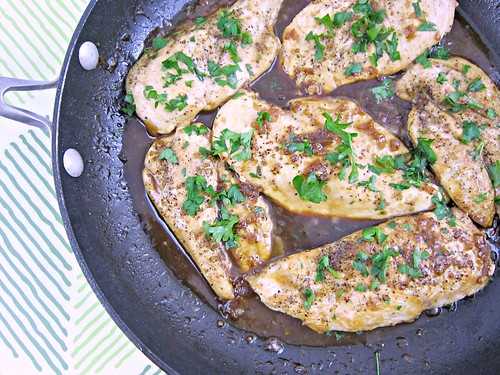 There’s no reason to ever have “boring” chicken, when you can top plain ol’ chicken breasts with an amazing sauce of shallots, beer, honey, and mustard that will rock your taste buds!
Chicken with Honey-Beer Sauce
As seen on So, How’s it Taste?