Do you ever watch movies that you loved years ago, only to discover that the picture quality (and possibly the acting, as well) are not all that great anymore? J wanted to watch Twister this weekend, and he was more than a little underwhelmed. Of course, he’d never seen it before so it was a little different than me, who has seen it 1,083,297 times. Like, every time it’s on TV. I warned him ahead of time that it wouldn’t be great picture quality compared to today’s standards. He fell asleep about halfway through. I watched ’til the end. What can I say, I like happy endings. And tornadoes. I want to chase tornadoes, y’all. Not like up in one, close like they were in the movie, but close enough to see the funnel formation. Fortunately I don’t live in tornado country, so…yeah. I’m talking about something I know very little about. Don’t get me wrong, I know that they cause insane destruction and devastation. They’re not to be taken lightly. But if you could get a safe distance from one, with no chance of harm, wouldn’t you want to see it?? Or maybe I’m just a little bit crazy?

Maybe I should just stick to things I know about. Like cooking, perhaps? Are you back with me now?? I hope so, because I have a pretty yummy pork recipe to share with you. 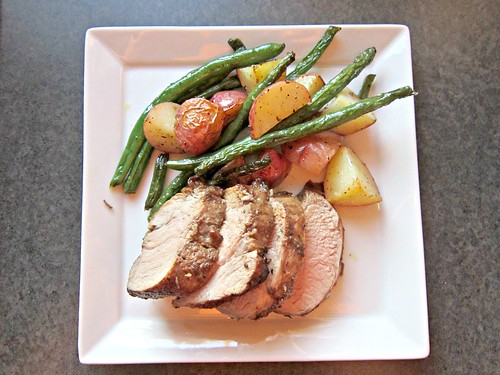 Pork tenderloin is just about the only cut of pork I cook. Not including bacon, of course. But I can safely assume that it will always come out good. Pork chops…not so much. I’ve tried, a gazillion times, and I just can’t get on board. So, I’m always looking for new variations of pork tenderloin. This one I found recently, and, Hello! Balsamic vinegar! Done and done. And look how pretty the turned out. 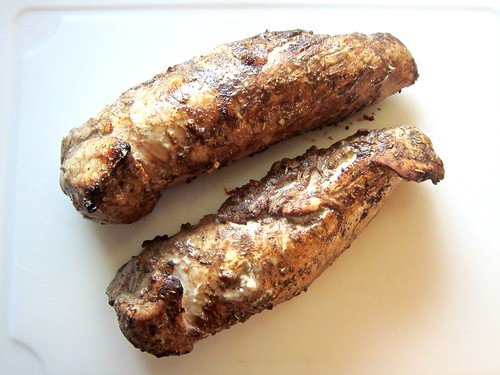 And the picture below? I find myself often having to blow at the food while I’m trying to take pictures, because the steam coming off of them can sometimes make the picture look blurry. I did that in the picture above, but then just for grins I stepped back and tried to get a picture of the steam coming off of it. I’ve never captured it before, only the blur effect, and I thought it looked pretty cool. So I shared it on Facebook, and decided I should share it with you here as well. Just because I think it’s cool. 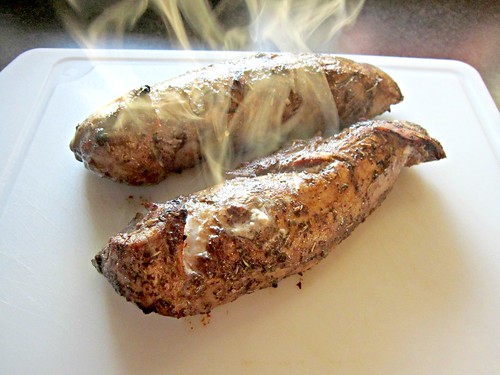 I also wanted to clarify some of the directions below. I have a double oven. I realize that not every does. Both components of this recipe are cooked in the oven, but they don’t cook for the same amount of time, so I gave instructions on timing, to get the veggies in just a few minutes before the pork so they can cook 30 minutes, while the pork only needs 20 minutes. You also have the option to put them in at the same time and have the veggies finish cooking while the pork rests on the cutting board. Do whatever works best for YOU. 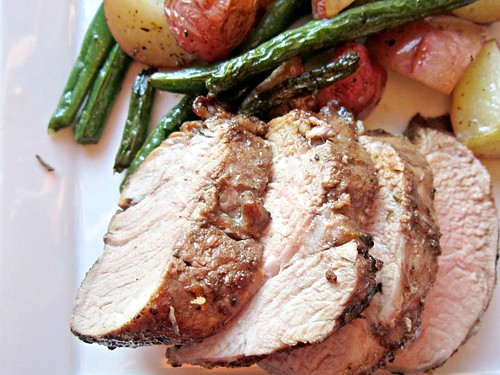 However you choose to time the cooking, this dish is amazing! Balsamic vinegar and herbs season the pork very nicely and roasted veggies – of any kind – are always a big hit for a side dish. Make this for your family soon!!

For the roasted vegetables